With another Russian invasion of Ukraine’s sovereign territory on the horizon, we cannot afford to retreat to stale, intellectually lazy and above all dangerous clichés about Ukraine’s ‘pro-EU’ and ‘pro-Russian’ halves.

Pick up any news clipping about Ukraine from the past twenty years, and you are likely to find a cursory description of the country along these lines: ‘Ukraine, roughly the size of France, divided between a pro-EU west and a pro-Russian east’. A journalist once admitted to me that his editors routinely appended such a refrain even to articles and reports attesting to a different, more complex reality – to a highly diverse but ultimately coherent country. Ukraine was too poorly known in the West beyond nuclear accidents and feuding politicians, he explained. In media discourse it needed a 'brand', an easy shorthand, a consistent diagnosis to account for a host of geopolitical maladies. A consensus emerged: bipolar disorder. Ukraine became known as the perennial ‘house divided against itself’, riven along a deep west/east, pro-EU/pro-Russia fault line. Months ago, this reductive cliché used to irritate me. Now it keeps me up at night. As Russian troops amass along Ukraine’s eastern border, it may be the most dangerous idea circulating in Europe today.

Ukraine is not existentially divided. Its body politic is scarred and fractured, but it is whole. Labelling its eastern regions ‘pro-Russian’ – ontologically disposed to a neighbouring state and culture – is not only inaccurate as an historical matter but perilous as an analytical one. We need to appreciate the gravity of this likely scenario: if the Russian Federation invades the east of Ukraine, most residents of such eastern cities as Kharkiv and Donetsk will not open their arms or shrug their shoulders. There will not be a repeat of the Crimean affair, which saw little violence thanks to a Ukrainian military determined not to legitimate Russian provocation with compensatory force. If Russia invades beyond Crimea, Ukrainians will defend themselves. And Europe will be witness to a war between its largest countries, with dire economic and human costs for us all.

Each day brings new details of a Russian theft of Ukrainian strategic assets – nearly all of Ukraine’s Black Sea Fleet has been sunk or stolen outright – and of a massive Russian military build-up along Ukraine’s eastern border. How massive? ‘Very, very sizeable’, in the words of NATO Supreme Allied Commander Philip Breedlove. ‘Tens of thousands’, say members of the US Armed Services Committee. Andrii Parubii, Secretary of Ukraine’s National Security and Defense Council, recently quantified it in this way: 100,000 Russian troops and more than 370 artillery systems, 270 tanks and 140 combat aircraft. Meanwhile, across the border, Ukrainians in eastern cities like Kharkiv are organizing masterclasses in triage and first aid, and crowd-sourcing the translation of books about the tactics of light infantry. Others in a vocal minority, by contrast, are beckoning the Russian armed forces in public with enthusiastic shouts of ‘Rossiia!’. Many of these demonstrators are actually touring Russian provocateurs. Kharkiv journalists have devised a canny way to determine their provenance: they simply ask them what time it is. Western Russia is two hours ahead of Ukraine. As it turns out, watches and smartphones tend to run very fast at these demonstrations.

This Russian military escalation and these coordinated public demonstrations in support of Russian intervention may not alarm the casual observer in Britain, who has been told a story about the ‘pro-Russian’ complexion of Ukraine’s east for far too long. But we should be alarmed. Let me explain by stating what should be obvious: Ukraine’s east is ‘pro-Ukrainian’. Its Ukrainian identity is idiosyncratic and contested, but it is dominant. Moreover, it has been historically influential. Kharkiv, in fact, is a central birthplace of the modern Ukrainian national idea. In the first decades of the nineteenth century, Kharkiv University was a seminal bastion of Ukrainian Romantic thought, a site of vigorous heritage-gathering and artistic creation. The University’s professors – Amvrosii Metlynsky, Petro Hulak-Artemovsky – as well as its students – Mykola Kostomarov, Levko Borovykovsky – strove to elevate the Ukrainian vernacular to the status of a literary language, publishing original poetry and historical research in such Kharkiv journals as The Ukrainian Herald, The Ukrainian Digest, The Ukrainian Journal and The Ukrainian Almanac. By 1876, when the tsar explicitly banned the Ukrainian language from the public life of the Russian Empire, such periodicals ceased to exist in Kharkiv. But they nonetheless laid the ground for an explosion of Ukrainian cultural production in the twentieth century, when Kharkiv was the capital of the Ukrainian Soviet Socialist Republic, and in the twenty-first century, when Kharkiv became accustomed to celebrating the accolades of its native son Serhii Zhadan, one of Ukraine’s most popular writers.

And what about Donetsk, widely known in the West as a ‘pro-Russian’ city populated by miners, oligarchs and football stars? Founded in 1879 by Welsh industrialist John Hughes, Donetsk is an unofficial capital of the Ukrainian national rukh oporu, the dissident ‘defence movement’ that championed the rights of Ukrainians and many other groups in the Soviet era. Ivan Dziuba, who graduated from the Donetsk Pedagogical Institute, wrote the classic underground exposé of Soviet nationalities policy, Internationalism or Russification?; Mykola Rudenko, who penned touching poetic reflections about his Donetsk childhood, led the Ukrainian Helsinki Group; Vasyl Stus, who also attended the Donetsk Pedagogical Institute, was a member of the Ukrainian Helsinki Group and the greatest Ukrainian poet of the twentieth century; and Oleksa Tykhy, who worked in Donetsk as a biology teacher, courageously confronted Soviet officialdom over the suppression of Ukrainian national culture. All of these prominent figures were imprisoned for ‘pro-Ukrainian’ activities; both Stus and Tykhy died in the gulag as late as the mid-1980s.

And today? Over the past decade, poll after poll of respondents in Ukraine’s eastern oblasts reveal – to entertain the reductive label one final time – a majority ‘pro-Ukrainian’ sentiment. In a 2005 Razumkov Centre study, for instance, 67% of citizens from Ukraine’s east answered positively in response to the question ‘Do you consider yourself a patriot of Ukraine?’, while 22% answered negatively and 11% found it difficult to answer at all. Likewise, in a 2006 Razumkov Centre study, 62% of respondents in the east said ‘Yes’ to the question ‘Would you choose Ukraine as your fatherland if you had the choice?’, while 20% said ‘No’ and 18% ‘Hard to say’. Keep in mind that in Ukraine per capita GDP was $2,303 in 2006; in Russia it was $6,947. Even despite economic disparity with its powerful neighbour, most residents in Ukraine’s east have made a point of embracing the Ukrainian state as their home.

It is high time we listened to them. With another Russian invasion of Ukraine’s sovereign territory on the horizon, we cannot afford to retreat to stale, intellectually lazy and above all dangerous clichés about Ukraine’s ‘pro-EU’ and ‘pro-Russian’ halves. Ukraine is a large, diverse country that has managed its many differences admirably since winning independence in 1991. Today the Kremlin is trying to fetishize, manipulate and exaggerate these differences through brute force, intimidation, provocation, and propagandistic deception – simply because the Ukrainian people ousted a corrupt, criminal president and fought to determine their own destiny. War is imminent, and the Kremlin is counting on our ignorance and on our tacit questioning of Ukraine’s sovereignty over its eastern territory. We need to respond not only by supporting the new Ukrainian government with ambitious financial assistance but by making Ukrainians, at last, the subjects of their own story. 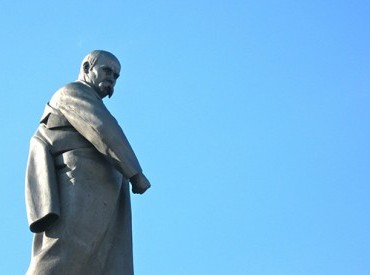 A statue of the poet Taras Shevchenko, in Kharkiv. This year marks the bicentennary of his birth.